At the end of October, Kentico released the long-awaited version of Kentico Xperience, their flagship Digital Experience Platform (DXP). Like with most new technology releases, the GRM team love digging down in to what’s new, finding out how we can use it to help push our client's digital strategies even further.

The release of Kentico Xperience 13 will help content teams deliver better experiences now and in to the future, but it isn’t necessarily evident from the user's perspective. In fact, it all looks very similar to its predecessor, Kentico 12.

If you were expecting a heap of new bells and whistles for your marketing team in this update, then you’ll be disappointed. Aside from a few nifty usability features in the marketing automation suite (more on that later), much of the core functionality has remained the same. We don’t think that’s a bad thing though; Kentico have built up a solid marketing suite that acts as the foundation for their DXP, so you’ll still have access to the usual contact management, forms, lead scoring, and email builder.

Where this update really changes things is under the hood, and the GRM Kentico development team were very excited indeed!

For Kentico, the release of Kentico Xperience 13 was all about futureproofing the product; giving clients the platform on which they can accelerate their digital transformation. The way that they have done this is by adding support for .NET Core, Microsoft’s latest version of .NET which is set to replace the older version in the not-too-distant future.

Amongst its many benefits, users will experience faster load times, increased control over code, and simplified deployment with the ASP.NET MVC Framework. It’s a big step for Kentico, one that shows intent and should instil trust in anyone looking to make a substantial investment in Kentico Xperience as the Digital Experience Platform to drive their digital transformation.

“.NET Core will allow developers to build websites and apps on modern technology that is more modular and easier to deploy. This technological transformation also directly impacts CIOs and CFOs in their strategic decisions. They can now stand assured that, with Xperience, they are investing in the technology of the future,” said Petr Palas, CEO of Kentico Software.

Finally, something for the marketers to get excited about! If you’re spending lots of your time creating complex automation flows in the back end, then you’ll be delighted to see that the marketing automation platform has been given a full facelift. It’s not just visual aspects though as you might think from the screenshot below, there are some nifty updates which we’ve all been crying out for!

One of them is the ability to create new emails directly in the marketing automation platform itself. It may sound simple, but this was always an arduous task, especially if you’re the sort of marketer who likes to lay out their automation flow before getting the emails set up. Now you no longer need to bounce from marketing automation to the email builder, it can all be done in one place.

To take this one step further, Kentico have even been kind enough to include automation templates in Kentico Xperience 13. Instead of having to create a new workflow every single time, you can choose from one of the predefined templates which includes processes such as sending birthday emails, abandoned cart sequences and re-engagement campaigns. 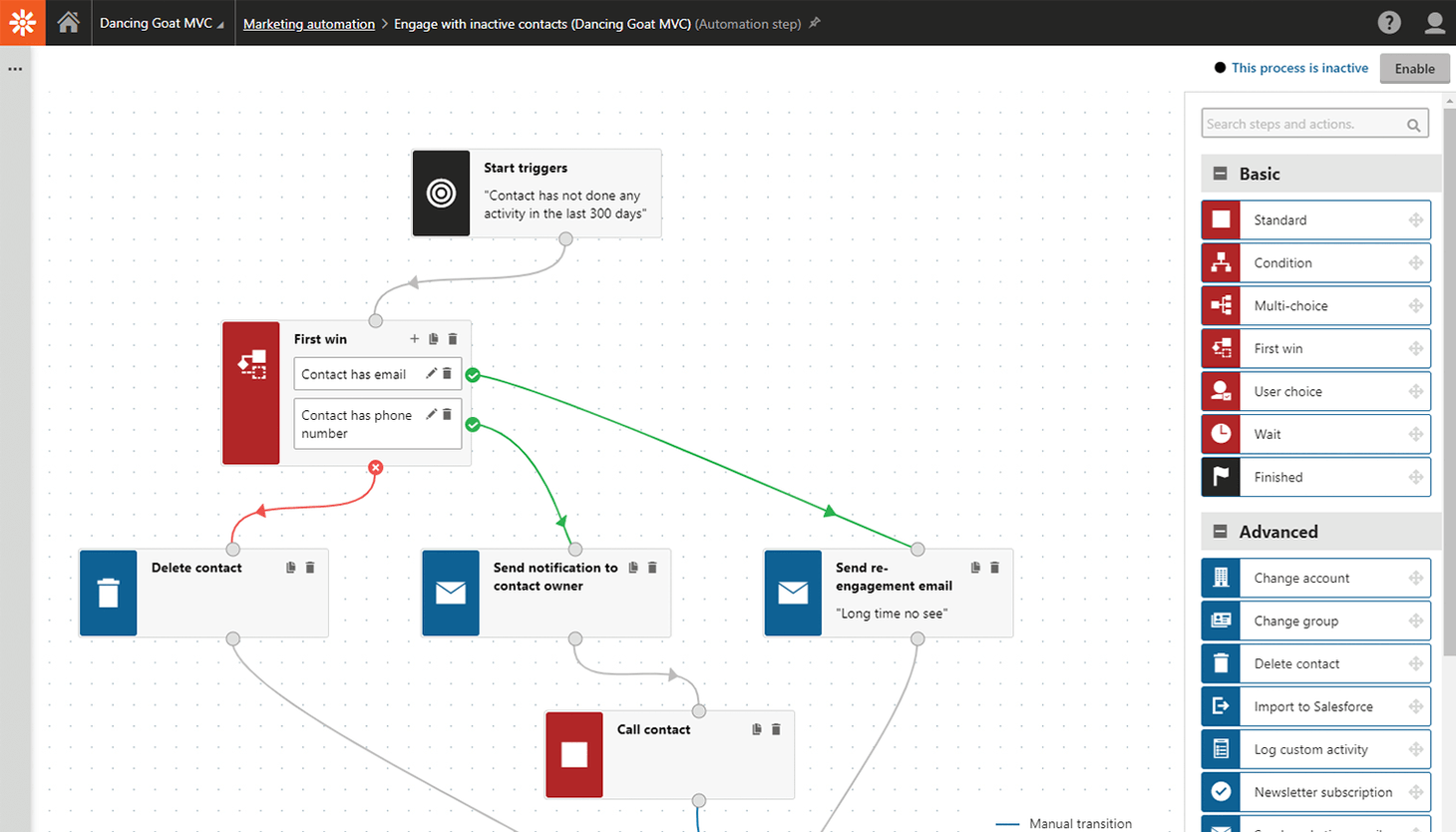 Kentico have given Kentico Xperience 13 marketing automation suite a much needed facelift.

If you were following any of Kentico’s updates at their Brno Connection event in 2019, you’ll remember how they used #kenticophoenix to symbolise how they would be burning all of the unused features that have accumulated as part of a 10+ year old CMS product. Kentico were true to their word, and in Kentico Xperience 13 you will not have access to the following features; polls, banners, events, chat, message boards, forums and transformations.

Kentico have really used this time to get rid of some dead wood; old implementations and features that are not heavily used. That’s not to say that they can’t be included in your DXP, but they would require custom code or integration of a best-in-class solution for each tool (probably the best way to go anyway).

The rise of voice assistants has been astonishing in the past few years, so it’s no surprise to see them on the radar of a leading DXP like Kentico Xperience. If you upgrade to Kentico Xperience 13, you will now have the potential to control the admin interface using KEVIN, Kentico’s purpose-built integration tool that works with Amazon Alexa or Google Home. This is a complete game-changer, making Kentico Xperience 13 more accessible to those with disabilities or those who prefer to use voice to control the administration interface instead of typing.

We’re not 100% clear on the extent of the integration and how much can be controlled, but we’ll be reviewing this on our social media channels in due course! Follow us on LinkedIn for further updates.

Should you upgrade your Kentico site to version 13?

Like with most Digital Experience Platforms, it really does depend on where it sits within your digital roadmap and what your plans are for the future. If you intend to stick with Kentico Xperience and have plans to use it as the base for your digital transformation, then it would be wise to gear up for the future, and Kentico Xperience 13 can certainly help you with that.

If you are considering upgrading your Kentico 12 MVC site or going for a complete redesign, Kentico Xperience 13 will give you a great platform to build upon in to the future, with fast load times, simplified deployment and the most up-to-date marketing suite.

If you would like to find out more about Kentico Xperience 13, or you’d like an independent review of your platform to provide you with option for the future, speak to GRM, we’d be happy to help.

Read more about how we became a Kentico Xperience Quality Expert.

Find out what else will be added to Kentico Xperience in the future.

Here are some similar blogs that you may be interested in...

Ready to get started on your project?